I went to the community meeting about McKinley Village last night. It started at 6:30 and didn’t wrap up until 8:30. There was lots of good information, but most of the crowd wanted much more, and they were a very tough crowd!
I’m glad that I wasn’t one of the people at the front of the room because they had it rough. There was probably 250 people in attendance and almost all of the vocal ones were unhappy. There were several people that spoke out in favor of the project but they were definitely out numbered by the ones with concerns and questions.
What are my take aways from the meeting?
There is a good chance that this site is going to be developed. I talked to the city planning department representative after the meeting and it sounds like there truly is a decent chance of houses going into this site in the next two years.
Despite the local opposition to the plan, this is the best plan that this site has seen and if it is going to be developed (and not into just a large park) 325 houses is much better than a high-rise hotel and office complex or the big box stores that were proposed by other developers in the past.
The application for this development was only made one month ago, so it is still in the very early stages. A traffic study has been started and will take another 8-12 weeks to complete. An Environmental Impact Report has been ordered and that extensive report should be completed in October and up for public review at that point.
The design is better than I originally thought. They will be doing high earth berms with trees instead of a sound barrier wall, both on the side with the freeway and the railroad tracks. They have placed the houses far enough back from the tacks so they shouldn’t feel any of the vibration of the trains. They are going to have about 40-45 different home designs so it won’t look like a cookie cutter development. The are budgeting much higher build costs for each house (I think it was 40% above their normal build budget) to make sure that they can give them all the character and charm that they will need to appeal to the local expectations, which they know will be very high.
When I look at an average East Sac block, they have about 40-50 houses on each block, depending on the block. If the builders get to build 325 houses, that is the equivalent of 7 to 8 blocks. To give myself an idea of what this looks like in current East Sac reference, there are 332 houses on the blocks of 34th, 35th, Santa Ynez, 36th, 37th, 38th and 39th Streets between H Street and McKinley Boulevard. Surprisingly, this was about the same amount of land with one being .07 square miles (44 acres) and the other being .08 square miles (51 acres). 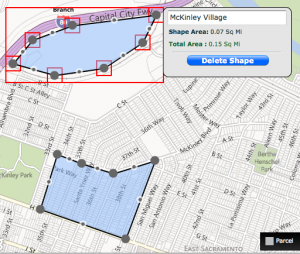 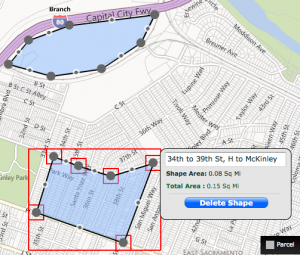 Do I get a little freaked out about having those new homes added into the neighborhood behind me? Yes, although not as much as my wife does.
Does it feel better for me to think about it in the terms of 7 more blocks of neighbors behind me? Yes, that doesn’t bother me nearly as much.
Would I rather not have this land developed and not be dragged into this conversation? Yes. Change is hard and I don’t like it and it scares me sometimes. Does this mean that I oppose it? No, I’m still not for or against it yet.
Would I still have bought my house on Santa Ynez two months ago if I know that this development was going in? You better believe it! The block of Santa Ynez between 39th and McKinley is my favorite block and I don’t think this development will impact that.
I can respect all the other opinions can concerns about what this means for the neighborhood, but I don’t think it will be a big deal once it is all said and done. It will have a larger impact during construction for the residences on B Street that back up to the tracks or the houses near the entry roads after development, but I think that as you move a few blocks out the impact will be minimal. I may be wrong and there are plenty of people that feel different about the project.
Only time will tell what will eventually be developed here and what impact it will have. I’ll keep a close eye on it and keep posting about it…