McKinley Village Project on the Table Again in East Sac

Well, once again the 48 acres of land North of East Sac between the Capital City Freeway and the Union Pacific Railroad tracks near Sutter’s Landing Park is being reviewed for development. The current name for the proposed development is the Mckinley Village.

Many residents are getting involved in the conversation and want to know what the impact will be.
Fortunately, there are many ways to find out. I’m not going to try to recreate the wheel with all the thorough journalistic (and some less than journalistic) reporting out there, I’m just going to summarize the facts and point towards the information.
I’m also not going to weigh in for one side or the other just yet. As a resident of East Sac and the McKinley Park neighborhood, I’m very cautious of new development and any increased traffic. As a Realtor, I am always intrigued by new development (a good sign for the economy) and homes for sale. I’ll read all the information and go to the meeting and try to slowly form my opinion of this potential development…
According to the Q&A of the developer this would be:
328 single family one and two story homes on a 48-acre lot. Homes will range in size from approximately 1,250 square feet with three bedrooms and 2.5 bathrooms to approximately 2,500 square feet with five bedrooms and four bathrooms. Some of the homes will feature an option for second units, and others will have a master bedroom on the ground floor. This will be a $130 million development and they would expected the homes to sell from $300,000 to $600,000 plus.
Access to the Mckinley Village development for cars, bike, and pedestrian would be through A and 28th Streets in Midtown, and via an under-crossing of the UnionPacific Railroad tracks that connects through the Cannery Business Park to C Street between 40th Street and Tivoli Way in the McKinley Park neighborhood. There will also be a bike and pedestrian under-crossing of the Union Pacific Railroad tracks at B Street and Alhambra Boulevard in the McKinley Park neighborhood 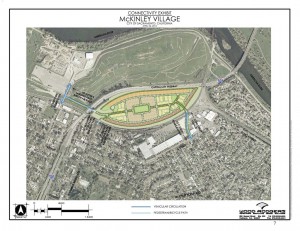 Mckinley Village would also include 2.9 acres of park land, which will require that RCI (the developer) pay maintenance fees to the Park and Recreation Department. There will be over 2,000 trees and an additional 3.26 arches of common green space.
Here are the links to the most informative articles that I have found:
A detailed article in The Sacrament Bee
http://www.sacbee.com/2013/05/12/5413743/phil-angelides-pushes-housing.html
The developers Q&A document
http://www.scribd.com/doc/141664071/Frequently-Asked-Questions-for-McKinley-Village
Brochure
http://www.scribd.com/doc/141668073/McKinley-Village-brochure#download
Illustration
http://www.scribd.com/doc/141665259/McKinley-Village-Illustrative
Plans
http://www.scribd.com/doc/139731007/McKinley-Village-Plans
Several articles in the Sacramento Press
http://www.sacramentopress.com/headline/82300/Residents_react_to_the_McKinley_Village_project
http://www.sacramentopress.com/headline/82716/Sacramento_Old_City_Association_forum_on_McKinley_Village_development
http://sacramentopress.com/headline/82710/McKinley_Village_RCI_response
And an article in the East Sac News
http://www.valcomnews.com/?p=9851
There are two upcoming meetings that I plan on attending to find out more about the development and participate in the conversation.
A community meeting sponsored by MENAand ESIA on June 4th at 6:30pm at the Clunie Auditorium. The presenters will display graphics and answer questions on the proposed development. Other local development projects will be displaying materials and answering questions at the meeting as well.
The Sacramento Old City Association is organizing a public forum on Mckinley Village on June 8 at the Midtown Village Cafe (1827 I St, Sacramento, CA 95811). The event begins on at 9:00 AM so you better show up early to get your coffee and a chair!
This might be an interesting one to follow like the project at Curtis Park Village that has taken years to get off the ground. Then again it might not even get close to becoming anything and just stay an empty field for the next several decades with the occasional resident living under a blue tarp against that chain link fence seen from the highway…