I don’t usually post about new articles that I see, but this one was very good and relevant to so many conversations that I’ve had recently.

The article is titled “Now You See It, Now You Don’t” and it is about the “shadow inventory” and the market condition.
Anyone that works in the real estate industry knows that right now we have very low inventory and lots of interested buyers. currently has 0.8 months of inventory on the market.
The Months of Inventory is a reflection of how many houses are for sale and how many are being purchased each month and how long would it take for them all to sell at the current rate. The lowest Month of Inventory durring the boom was April 2003 and the highest inventory in the bust was September 2007. 4 months of inventory is a very balanced level with numbers lower than that being considered a sellers market and anything above that being a buyers market. Now we have seen several months in a row with inventory levels lower than 2.0 and even below 1.0!

What is the reason for this? Are the banks holding onto a lot of shadow inventory, covering the carrying costs, keeping the non-performing assets on their books (or just doctoring them so they don’t show up) and waiting for/manipulating the market to improve before selling them? Do they have hundreds of thousands of houses that they have foreclosed on and are going to dump them on the market when prices come up?
While I love a good conspiracy theory, I also believe that the simplest explanation with the least assumptions is often the best (a version of Occam’s Razor).
This article went into several detailed aspects and included that by all expert analysis there is only a minimal amount of bank owned properties that aren’t put on the market quickly. I have often seen bank owned listings that show only 1 day on market (DOM) but hundreds of combined days on market (CDOM). I look at the history and see that this was a short sale that sat on the market for months waiting for bank approval for the sale but finally ended in foreclosure. The bank then had their asset manager arrange for the clean out, new paint and carpet and listed the property for sale, all in less than 30 days (otherwise, the CDOM would be the same as the DOM).
The big issue that this article pointed to is that there is a different kind of shadow inventory and it’s not what I or most people consider or refer to as shadow inventory. It is all the properties that are delinquent on their payments and will most likely never become current. It is the houses in pre-foreclosure, foreclosure or short sale status where no payment is being made, the owners are getting further and further under water and the most likely outcome for them is foreclosure.
The article then goes further to point out that all the people that are living in a home in foreclosure, pre-foreclosure or a long, drawn out short sale process aren’t selling, they aren’t buying (and won’t be able to for a long time) and they aren’t even renting.
According to the reports, if all the properties that are currently owned by banks but not on the market were listed tomorrow, we wouldn’t even notice it. On the other hand, if all the delinquent properties were foreclosed on in the next couple months and put on the market, that would make a huge impact and we would definitely feel it.
Of course, this hypothetical blood bath of massive foreclosures over a few months time isn’t going to happen for many reasons. The real reasons this wont happen and the conspiracy theory reasons include: foreclosure regulations, loan modification attempts, banks being too slow and bogged down, banks wanting to hold off on foreclosures until the properties are worth more, etc.

Whatever the real story is, there isn’t enough inventory on the market and the banks are not sitting on vacant houses that they own but just don’t want to sell. My buyers are scrambling over the few properties that are on the market and competing with multiple offers. It is a brutal market and I look forward to getting back to something that could pass as “normal”. Fortunately, we live in a world of impermanence and this too shall pass. 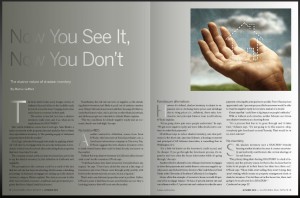 You can read the full article here starting on page 14.